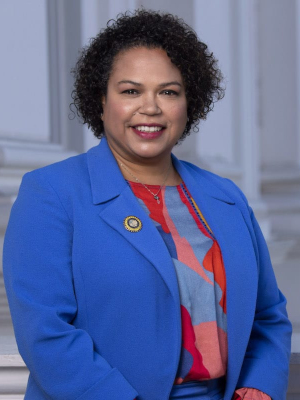 Mia Bonta was elected to serve California’s 18th Assembly District in a special election on August 31, 2021. Her district encompasses the East Bay area of Northern California. It includes a large portion of the City of Oakland and the cities of San Leandro and Alameda. Assemblymember Bonta’s priority is to make California a more affordable, inclusive, and equitable home for all.

Mia has spent her career advocating for students and working families. Mia made Alameda her home more than 20 years ago where she has worked for and led several nonprofit organizations focused on improving educational outcomes for low-income students. Prior to being elected to the State Assembly, Mia served as the CEO of Oakland Promise, a cradle-to-college and career preparation initiative across Oakland public schools. In 2018, Mia was elected to the Alameda Unified School District School Board and she served as Board President from 2018-2021. In addition to her professional work, Mia has served on the boards of national non-profits seeking to build power for low-income people like Community Change Action and local providers like Alameda Free Library Foundation. Mia also served as an appointed 18th Assembly District Delegate to the California Democratic Party and on the AD-18 Advisory Committees for Women, Education, and Early Childhood.

Mia’s advocacy on behalf of children and working families became the focal point of her campaign for Assembly. Mia has seen firsthand the cracks in the systems intended to lift up the most vulnerable in her community, and she campaigned on priority issues such as fighting homelessness, building more affordable housing, passing transformative criminal justice reform, and combating the threat of climate change. She also intends to prioritize issues in California’s public education system so that students and teachers have the resources they need to succeed.

A proud Black Latina, Mia was raised by activists who protested outside the halls of power so that one day, people like her could have a seat at the table inside. Growing up, Mia moved 13 times in 16 years, and with every move she carried what was most precious to her: a crate of books. Education was the one constant in her life, and Mia was fortunate to attend schools that would foster her love of learning and offer her a caring community of teachers and administrators committed to her success. For Mia, education was life-changing, and was what first inspired Mia to become a public servant. Mia holds a B.A. in Psychology from Yale University and went on to pursue an Ed.M from Harvard Graduate School of Education and a J.D. from Yale Law School.

Assemblymember Bonta lives in Alameda with her husband, Rob, and their three children.