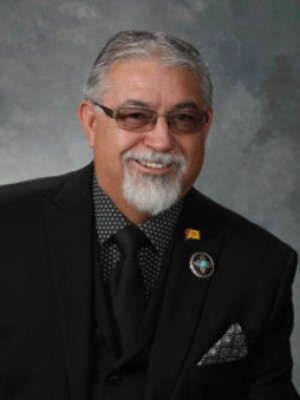 Currently he is serving his 21st year on Eunice School Board - Serving on this board introduced him to working with the legislature, having to go to the capital yearly to ask for assistance as well as discussing educational ideas with our representatives.

He was born in Holman, New Mexico, raised in Colorado, and graduated from West High School in Denver Colorado. He takes a lot of pride in our County, State and Country, he is very community minded, and try to be proactive in everything he does. He believes he has always listened to the needs of our residents, and have fought for what is right not just for what is popular. He tries to use good information, his reasonable judgment, and a calm and steady personality to arrive at the best decision possible.

In 2012, he was the first Hispanic elected to the New Mexico House of Representatives for District 61, which covers part of Lovington, Hobbs, all of Monument, Oil Center, Eunice, Jal, Maljamar and the southern parts of Lea County New Mexico. During his first session He was seated on the Education and Labor Committees. During the interim, he has been appointed as a voting member to the Land Grant, Radioactive and Hazardous Waste, and as an advisory member to the Legislative Education Study Committee.

He has also have been honored to be positioned on the Standing Committees for the National Conference of State Legislatures, on the Natural Resources and Infrastructure, Labor and Economic Development, and Education Committees.

In 2013 he was selected as an Emerging Leader, he was sent to training to make me a better legislator.

In 2015 he was selected to participate in your Western Legislative Academy in Colorado, where were we given leadership training, and lessons on working together. He enjoyed his training and look forward to using the information as he progresses in Life.

In 2017 he was selected as the first ever New Mexican for a Statesman Academy, this is where Family Policy, a partner of Focus on the Family, finds legislators throughout the US to help fine tune them from being a politician to becoming a Statesman. After arriving back, he was asked about helping start the New Mexico Family Policy Alliance.

In 2018, he traveled to China with Lieutenant Governor John Sanchez and Representative Greg Nibert. They traveled to six cities in 5 days, explaining the opportunities that New Mexico has to trade with China. The most significant is the sale of oil and natural gas from the Southeast side of New Mexico. He believes President Trump has done a great job in leading the discussion with his tariffs and hopes to resume these discussions at the Federal level in the near future.