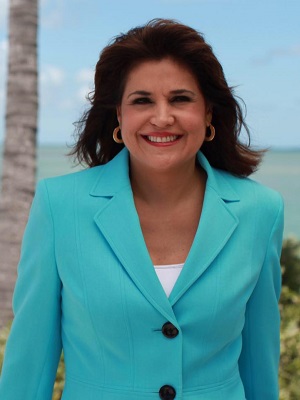 WHEREAS, United Nations High Commissioner for Human Rights, Michelle Bachelet, has concluded that "essential institutions and the rule of law in Venezuela have been profoundly eroded. The exercise of freedom of opinion, expression, association and assembly, and the right to participate in public life, entail a risk of reprisals and repression";[1] and,

WHEREAS, according to a March 2019 Office of the High Commissioner (OCHA) assessment, an estimated 7 million people in Venezuela need humanitarian assistance, which equates to about 25 percent of the population;[2] and,

WHEREAS, the minimum wage in Venezuela, around $7USD per month, does not even cover 5 percent of the basic food basket for a family of five;[3] and,

WHEREAS, the United Nation’s Food and Agriculture Organization (FAO) reported in 2018 that 3.7 million people in Venezuela were malnourished;[4] and,

WHEREAS, public services, such as transportation, electricity, and water have all but collapsed;[5] and,

WHEREAS, all of these factors have forced Venezuelans to migrate to other countries; and,

WHEREAS, about 10 percent of Venezuela’s population has fled the country because of this humanitarian, economic, and refugee crisis;[7] and,

WHEREAS, the majority of migrants have fled to Colombia, Chile, Ecuador, and Brazil;[8] and,

WHEREAS, as of June 2019, President Nicolas Maduro of Venezuela planned to close the Venezuelan border with Brazil and was considering closing the border with Colombia;[9] and,

WHEREAS, other than the above-mentioned Latin American countries, Venezuelans have also been immigrating to the United States; and,

WHEREAS, Venezuelan migrants to the United States make up about 25 percent of all affirmative asylum applications;[10] and,

WHEREAS, the number of Venezuelan affirmative asylum applications has been the highest of any nationality for the past three years;[13] and,

WHEREAS, as a potential solution to the low number of affirmative asylum grants and the massive backlog of pending cases in immigration courts, many human rights advocates have suggested granting Temporary Protected Status to Venezuelan immigrants; [14] and,

WHEREAS, more than 215 national, state, and local organizations in the areas of immigration, civil rights, human rights, labor, faith, and education have also advocated for the designation of TPS for Venezuela; and,[15]

WHEREAS, Temporary Protected Status would allow Venezuelan immigrants to live in the United States for a period of 18 months, and allow them to re-register if conditions in Venezuela continue;[16] and,

WHEREAS, once a country is designated Temporary Protected Status, its nationals may apply through the United States Citizenship and Immigrations Services (USCIS); and,

WHEREAS, even if those are not enacted, the United States Secretary of the Department of Homeland Security may designate a country for Temporary Protected Status (TPS) under the following conditions: Ongoing armed conflict (such as civil war), an environmental disaster (ex. earthquake), or an epidemic, and/or extraordinary and temporary conditions.[19]

THEREFORE, BE IT RESOLVED, that the National Hispanic Caucus of State Legislators urges Congress and the President to fully fund measures to send humanitarian aid to Venezuela and neighboring countries hosting Venezuelan refugees; and,

BE IT FURTHER RESOLVED, that NHCSL recognizes that the grave human rights violations in Venezuela, as described by the UN High Commissioner for Human Rights, Michelle Bachelet, and others, meet the extraordinary conditions for Temporary Protected Status; and,

[6] See Report of the United Nations High Commissioner for Human Rights on the situation of Human rights in the Bolivarian Republic of Venezuela (July 5, 2019), available at https://www.ohchr.org/EN/HRBodies/HRC/RegularSessions/Session41/Documents/A_HRC_41_18.docx

Maduro plans to do this because of the tensions surrounding foreign aid deliveries.

[10] Affirmative asylum is processed by someone physically present in the U.S. and must apply within a year of their last arrival to the country. Defensive asylum is processed as a defense against deportation and is done through the Executive Office for Immigration Review. Venezuelans migrants make up more than 28,000 of almost 110,000 affirmative asylum applications. (https://www.uscis.gov/humanitarian/refugees-asylum/asylum/obtaining-asylum-united-states) See Zong et al., Frequently Requested Statistics on Immigrants and Immigration in the U.S., available at https://www.migrationpolicy.org/article/frequently-requested-statistics-immigrants-and-immigration-united-states#Refugees ;see also Batalova et al., Immigration Data Matters, available at https://www.migrationpolicy.org/research/immigration-data-matters