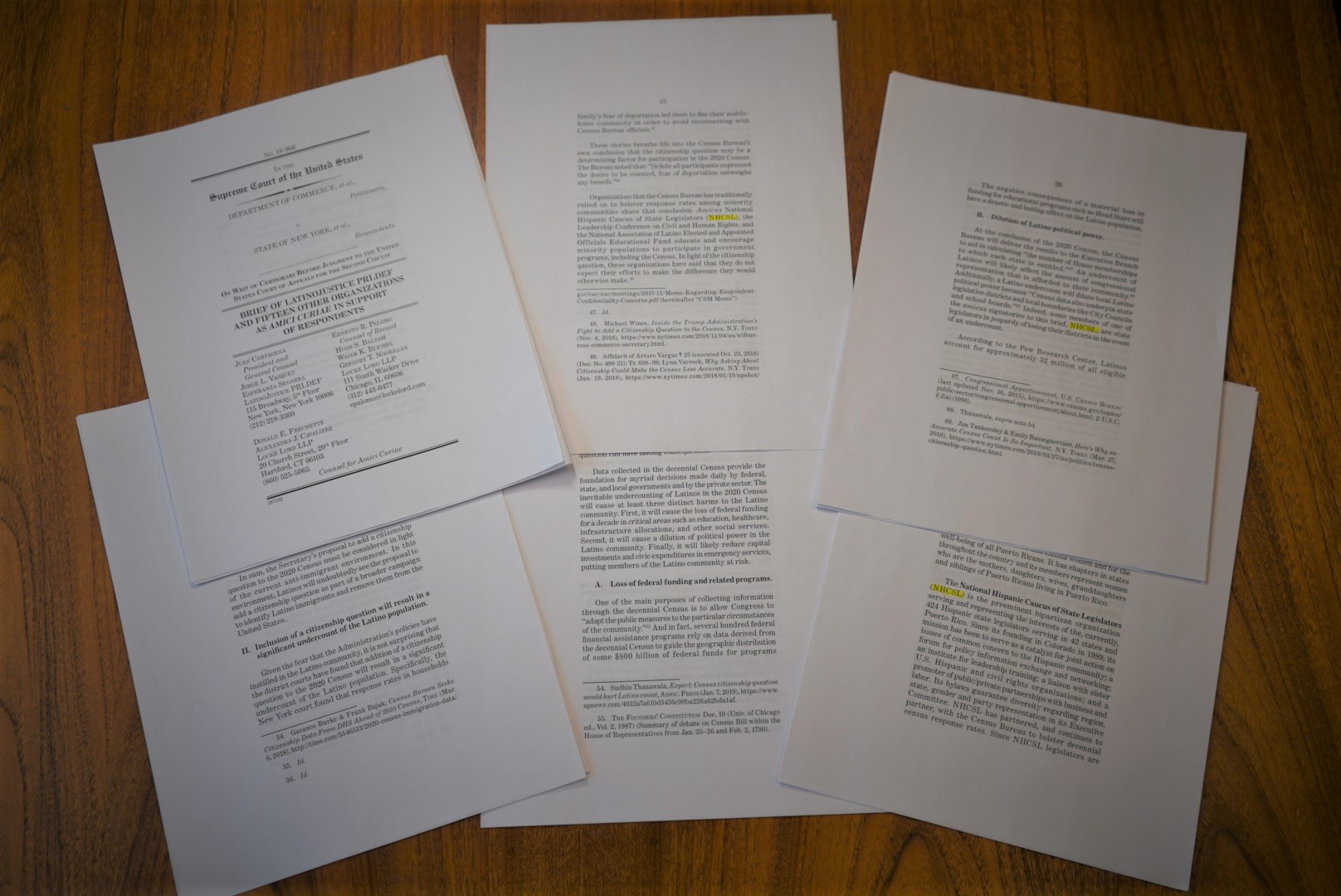 The National Hispanic Caucus of State Legislators (NHCSL) is proud to join the amicus brief filed before the Supreme Court of the United States on our behalf and that of 14 fellow leading civil rights organizations, like the Hispanic Federation and the Hispanic National Bar Association, by LatinoJustice PRLDEF in the case of Department of Commerce v. New York, calling on the Court to declare unconstitutional or illegal the Administration’s proposed inclusion of a citizenship question in the 2020 Decennial Census. This is the first time NHCSL files a brief before the U.S. Supreme Court.

Since NHCSL member-legislators from over 40 states and Puerto Rico are themselves Hispanic; are elected from population-defined districts, many heavily immigrant or Hispanic; depend greatly on Census data to determine state policy; and are responsible for state budgets, including distributing population-allocated Federal block grants, NHCSL has a multi-pronged interest in the accuracy, non-discrimination and completeness of the 2020 Census.

Our members and staff have been advocating tirelessly against the citizenship question since it was first proposed by Secretary Ross, including unanimously and bipartisanly approving a resolution against it in May 2018, following another unanimously approved Resolution, Ensuring the Census Works for All Americans. Both resolutions were sponsored by then Arizona state Representative (now Senator) Otoniel “Tony” Navarrete and former Utah state Representative Rebecca Chavez-Houck.

The Census has always been the cornerstone of America’s democracy and our republican form of government. Secretary Ross knows that many Americans, including many citizens, will shy away from answering the Census if it has a citizenship question. We therefore call on the Supreme Court to recognize that belatedly adding a citizenship question is a purposeful and unequal undermining of the founding fathers’ constitutional command to count all persons, not merely all citizens, in each decennial Census.

As to the questions presented before the Court, the brief coincides with our Resolution in arguing that:

Additional reasons we espoused for opposing the 2020 Census citizenship question included that:

On behalf of our President, Puerto Rico Senate Majority Leader Carmelo Rios-Santiago, our leadership and the entire Caucus, we recognize and thank LatinoJustice’s General Counsel, Juan Cartagena, for leading the work on the amicus brief. We hope to continue our long-standing partnership with LatinoJustice on this and other issues.

We also recognize the work of NHCSL Director of Legislation, Policy and Advocacy, Guillermo L. Mena-Irizarry, who coordinated NHCSL’s participation in the Amicus Brief, and researched and drafted the legal and policy position we adopted as to the citizenship question, which in turn allowed NHCSL to join the brief filed today. Finally, we thank and recognize our national Task Force on Latino Voting and Elections, led by Senator Navarrete, which brought the issue to the attention of our Executive Committee.

We are outraged that in the 21st Century the federal government would interfere politically with the nation’s Census. Our state and local governments depend on having the most accurate data possible for the apportionment of our districts, for the formulas several federal agencies and Congress use to appropriate taxpayer resources, and to have a sound system of counting every person in this country, regardless of citizenship or immigration status. The Constitution of the United States guarantees that every person shall be counted, and we intend to fight this decision to the very end so that this sacred constitutional provision is respected.

Representatives shall be apportioned among the several states according to their respective numbers, counting the whole number of persons in each state… – Amendment XIV, Section 2, US Constitution.

This decision was taken at the eleventh hour and demonstrates the plainly partisan and racist purposes behind the decision to include the citizenship question. The Administration’s own prior statements serve as incriminating evidence. In January 2018, the Office of Management and Budget struck a question to combine the ethnicity and race categories for which there was ample research and support, alleging that more research was needed. The fact that the new citizenship question was never researched at all, and in fact was excluded from the main Census test that took place in Rhode Island, speaks volumes about the arbitrary and capricious intent of this decision.

A link to the brief, as filed, is here.

Since 1989, the National Hispanic Caucus of State Legislators (NHCSL) has been the preeminent organization serving and representing the interests of the now over 400 Hispanic state legislators from all states, commonwealths and territories of the United States. Our mission is to serve as a catalyst for joint action on issues of common concern to all segments of the Hispanic community; a forum for information exchange and member networking; an institute for leadership training; a liaison with sister U.S. Hispanic organizations throughout the country; and a promoter of public/private partnerships with business and labor. Our bylaws guarantee diversity regarding regional, state, gender and party representation in our Executive Committee.

Since 1972, LatinoJustice has worked to create a more just society by using and challenging the rule of law to secure transformative, equitable and accessible justice, by empowering our community and by fostering leadership through advocacy and education.