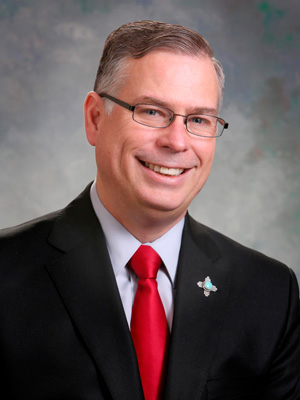 Senator Daniel A. Ivey-Soto (NM-15) is the President of the National Hispanic Caucus of State Legislators. Prior to his election on December 5, 2019 he served in the NHCSL leadership as West Region Chair and member of the Executive Committee.

In his state legislature, Sen. Ivey-Soto serves as Senate Parliamentarian, Chair of the Senate Rules Committee and Member of the Senate Judiciary Committee. He is also a member of the Advisory Board to the United States Election Assistance Commission and previously served two terms as Chair of the Elections & Redistricting Policy Standing Committee of the National Conference of State Legislatures (NCSL).

Sen. Ivey-Soto previously served as Associate Deputy Secretary of State of New Mexico for Elections, Ethics & Legal and was the New Mexico State Elections Director. He was also a prosecutor and has more than a decade of experience in criminal defense.

Sen. Ivey-Soto's first career was in education, as a teacher for grades sixth through twelfth, department chair and teachers union vice president and political action chair.

In addition to his classroom experience, Daniel served as a Congressional Hispanic Caucus Graduate Fellow in the office of Senator Edward Kennedy and was the education policy staff lead on the creation of the Hispanic Serving Institution designation for universities.

He is a life member of NALEO and a former Vice-Chair of MARCHA, an international Latino advocacy organization.