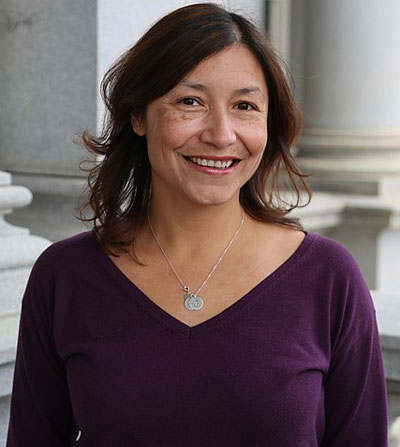 Julie Chávez Rodriguez is an American political rights activist and the director of the White House Office of Intergovernmental Affairs. She grew up in California in a well-known family of American labor and civil rights activists, the granddaughter of American labor leader, César Chávez and American labor activist Helen Fabela Chávez. From 2008 to 2016, Rodriguez served in the Obama administration, initially working for the United States Secretary of the Interior and later in the White House Office of Public Engagement. She was appointed state director for Senator Kamala Harris in 2016. She later served on the Kamala Harris 2020 presidential campaign from 2017 to 2019. In 2020, Rodriguez was hired by the Joe Biden 2020 presidential campaign as senior advisor for Latino outreach. Rodriguez was appointed to be the director of the White House Office of Intergovernmental Affairs by President Joe Biden, and took office on January 20, 2021.